Preparing for A Housing Crash

What We Can Learn From
Toronto’s Largest Real Estate Crash

This isn’t the first time we’ve looked at the Toronto real estate crash of 1989, but we came across two charts we found very insightful, and we’d like to share.

First, we recently saw a headline in The Financial Post, Is Canada’s middle class shrinking — or does It just feel that way?

Anything to do with the middle class tends to grab our attention. However, upon reading the article, there was one line that really bothered us, “A recent poll conducted by Ekos Research for The Canadian Press suggests fewer than half of all Canadians now identify as members of the middle class — a steep drop from nearly 70 per cent in 2002.”

This should be making front page news. The middle class in Canada is being destroyed at a rapid rate, and we need to do something about it.

The only two ways we know to circumvent this trend is to get yourself some hard assets, like good income-producing properties, or start your own small business. We’re big believers in both of these strategies.

There are obvious risks involved in both strategies, but no one ever got ahead without some sort of risk. That being said, do what you can to be prepared for the risks involved. One of the largest perceived threats, which keeps many from investing in income-producing properties is a market crash.

“What happens if I buy at the top of the market and things drop after closing?”

This is a question on a lot of people’s minds right now. The real estate market was so hot for so long, but since new mortgage rules came into effect in the spring of 2017, and then the new stress test at the beginning of 2018, there has been a big question mark hanging over the market.

There’s concern that we may be looking at a drop in the market, and no one knows how great of a drop that would be if it happened, and how long the market would be down.

We can’t predict the future, but we can look at the past to make an educated prediction of what a potential crash could look like.

So, we want to dive deep into that topic and go back to look at the Toronto’s largest real estate crash so we can learn from it. 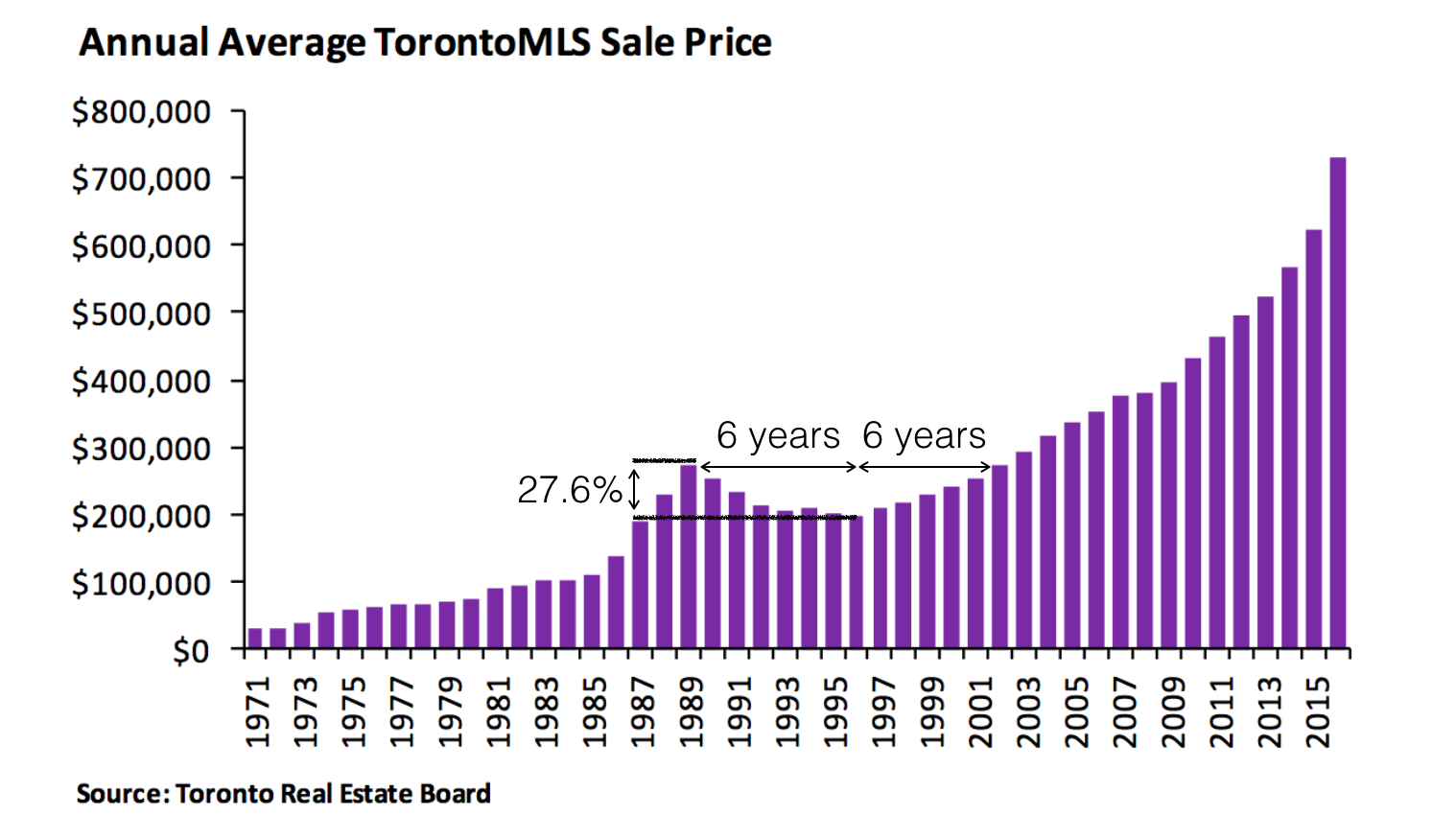 This chart looks at the average annual sale price of homes in Toronto from 1971 till 2016, but we’re focusing on the centre of the graph.

Now, what most homeowners want to know, the recovery time. It took 6 years (1996-2002) for prices to go from the bottom of the crash back to where they were prior to the drop. That means if you bought at the peak, before the “bubble burst,” it took 12 years on average for your property to be at the same dollar value as when you purchased.

Now, let’s look at another example.

When thinking about market corrections, it’s hard to ignore the market crash of 2007 in the United States. This crash didn’t have a major effect on the Canadian housing market, but it is another good historical example of what a major market crash could look like.

The average price depreciation in the United States was also 27% over those 6 years. It is important to note that these are national averages. Some areas saw far greater losses, and some only saw a small dip in the market.

In the United States, prices fell to the price they were 3 years before the crash. It took 5 years for them to go back up, for a total of 11 years for the market to fully restore itself.

It’s striking how similar the Toronto crash of 1989 and the U.S. housing crisis of 2007 are to one another. It gives us some a sense of assurance that if/when the market corrects itself, prices will likely drop over several years, but the market will bounce back eventually.

We are still big believers in income-producing properties. If you can find a property that produces positive monthly cash flow (more money coming in from rent than the monthly expenses), you have the flexibility to ride out dips in the market. Whether it takes 5 years, 12 years, or 20 years, you have an asset that is generating income for you, all while someone else is paying off the load. Seems like a solid choice to us.